The use of point-of-care thoracic (lung) ultrasound is an integral part of clinical practice that has shown diagnostic accuracy to help guide clinical decision making for pleural interventions [1].

A 63-year old woman with no previous medical history was diagnosed with acute promyelocytic leukemia (APML) via bone marrow biopsy on the day of admission. However, she developed a significant amount of bleeding from the bone marrow biopsy site, despite pressure application. This was complicated by disseminated intravascular coagulation and thrombocytopenia. All-trans retinoic acid (aTRA) therapy was immediately commenced to attenuate the coagulopathy and treat the malignancy. In addition, she received a total of 2 units of packed red blood cells (600mL), 20 units of cryoprecipitate (20mL), and 4 doses of platelets (1400mL).

On post admission day 1, the patient was referred for progressive hypoxia (2L/min) to (10L/min). However, she was hemodynamically stable, afebrile, and asymptomatic.  Physical examination revealed no edema in her lower limbs, but the jugular venous pulsates were was difficult to visualize. Auscultation of her lung fields revealed right lower lobe coarse crackles and her heart sounds were normal. Chest x-ray (CXR) revealed bilateral pleural effusions with air space opacification in the right middle lobe (Figure 1). ECG revealed normal sinus rhythm.

The dependent lung zones revealed pleural effusion as expected (Figure 2); and given their anechoic appearance and the absence of fibrin and swirling debris, these were simple pleural effusions. Each of the other lung zones, however, revealed at least 3 B-lines which is consistent with a bilateral interstitial syndrome. The pleural line was smooth with no evidence of subpleural consolidation and, also, the B-lines appeared to be evenly spaced.

The IVC was collapsing at <50% with spontaneous respiration. The subcostal view revealed no pericardial effusion except for a fat pad in the pericardial space. The right ventricle was not dilated, and the left ventricle appeared to have normal function, though assessment was incomplete.

Given the findings, the sonographic pattern found was consistent with a non-inflammatory etiology of interstitial syndrome, in which the primary pathophysiology was high pulmonary capillary hydrostatic pressure. Such findings are consistent with TACO. The patient was diuresed with furosemide, which mitigated the hypoxia.

This case illustrates how POCUS can expedite a diagnosis.  Studies have demonstrated the improved operational characteristics and diagnostic sensitivity of POCUS in locating pleural effusions, in comparison to traditional methods such as CXR and physical exam [2]. Specifically, the intrigue of this case was how POCUS application determined clinical management at the bedside.

For inflammatory conditions such as pneumonia, TRALI, or aTRA differentiation syndrome, they would yield an asymmetrical or unilateral sonographic thoracic pattern. In addition, the pleural line would likely be coarse with evidence of subpleural consolidation.

For TACO, furosemide is the therapy of choice [3]. For TRALI and aTRA differentiation syndrome, the primary management would be supportive care (non-invasive ventilation support) and adding on a corticosteroid for the latter [4]. There are additional implications to be considered in the diagnosis of such inflammatory etiologies. If TRALI was the cause, the patient should not receive future transfusion of any plasma-containing blood product from the implicated donor. If the diagnosis was aTRA differentiation syndrome, aTRA, a highly efficacious therapy, would be discontinued and corticosteroids must be used.

Thoracic (lung) POCUS is a valuable tool for assessment of urgent pulmonological diagnoses where immediate therapeutic decisions must be determined. 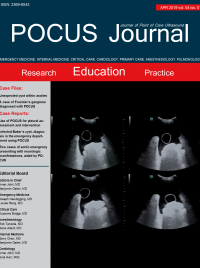 A case of Fournier’s gangrene diagnosed with POCUS

POCUS for pleural assessment and intervention