The use of Point-of-Care Ultrasound (POCUS) to provide clinical data beyond the history and physical examination is a relatively new practice for primary care providers and hospitalists. It takes many hours of dedicated ultrasound (US) training and practice to achieve POCUS proficiency; further, perceptions and attitudes of clinicians play a major role in adopting POCUS into daily clinical repertoire [1, 2]. Thus there are many possible barriers that could impede a clinician’s ability to develop the skillset to use POCUS in clinical practice. The state of Oregon encom­passes vast rural and underserved areas where POCUS could be a useful resource to improve local patient care [3,4]. For this reason, a qualitative survey study was con­ducted to assess the perceived barriers of clinicians to the clinical incorporation of POCUS.

A 20-question web-based survey was developed with input from local and national POCUS experts, including pri­mary care, hospital medicine and emergency medicine physicians.  This survey was administered on RedCap secure platform and approved by the Oregon Health & Science University (OHSU) Internal Review Board. Clini­cians were invited to take the 5-10 minute electronic sur­vey in-person on a provided tablet and volunteer partici­pants included any clinician who provides direct medical care. Recruitment took place at four medical conferences in the state of Oregon, each of which served distinct audi­ences including hospitalists, primary care, general internal medicine, and clinicians interested in POCUS. In chronologic order these conferences were the American Institute of Ultrasound in Medicine & American College of Physicians co-sponsored workshop at OHSU in July, 2017, Northwest Regional Hospitalist Conference in Sep­tember, 2017, American College of Physicians Oregon State Meeting in October, 2017, and OHSU Primary Care Review in February 2018.

Thirty-six clinicians participated in the survey. Twenty were in Internal Medicine, 11 were in Family Medicine and five practiced in another specialty. Twenty-nine par­ticipants were attending physicians, in addition to three residents, three nurse practitioners, and one other clini­cian. Ten participants were either mostly or exclusively in­patient clinicians, 12 were both inpatient and outpatient and 14 were either mostly or exclusively outpatient clini­cians. Eleven participants considered themselves Rural/Critical Access while 25 considered their practice setting to be Urban/Suburban.  Eighteen (50%) participants were from teaching facilities. In terms of practice experience, 15 clinicians had less than ten years, nine had 10-20 years, and 12 had 20+ years of practice experience. Eleven surveyed clinicians currently use POCUS while 25 did not use POCUS.

Of the eleven respondents who use POCUS, the greatest facilitators were improvement of physical exam, availabil­ity of continued training, and peer/skilled practitioner to review US Images. These were given the highest ratings on a five-point Likert scale indicating they were the most helpful or very helpful attributes that facilitated POCUS in clinical practice (Figure 1).

Of the participants who indicated that they do not current­ly use POCUS in clinical practice, the most frequently reported barriers reported were lack of previous ultrasound training, lack of available ultrasound machine and high cost of ultrasound machine. These were given the highest rating on a five-point Likert scale indicating they were the major barrier or significant barrier that clinicians per­ceived impeding the ability to use POCUS in clinical prac­tice (Figure 2).

Twenty-seven participants (75%) were either very likely or somewhat likely to take advantage of a regional train­ing center if established in Portland, Oregon.

Of clinicians surveyed, the greatest barriers to the use of POCUS were lack of previous ultrasound training, lack of available US machine, and cost of US machine. The most common facilitators included availability of continued training (CME), peer/skilled practitioner to review US images, and evidence of improvement of care. An over­whelming majority were at least at least somewhat likely to incorporate POCUS into their clinical practice if their noted barriers were removed, and also to take advantage of a regional ultrasound-training center if available in Portland, Oregon.

Participant recruitment was a major limitation to this project. Several attempts at obtaining participants through e-mails and newsletters first failed, thus only complete sur­veys that were completed in-person on electronic tablet were included in the final results. Half of those surveyed were from teaching facilities, likely a reflection of a higher proportion of academic clinicians attending surveyed conferences. However, despite small sample size, the demographics of those surveyed represented a relatively broad variety of practice types and experience levels. 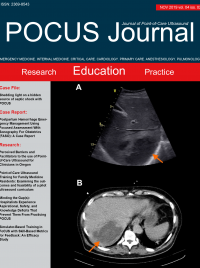 Shedding light on a hidden source of septic shock with POCUS

Minding the Gap(s): Hospitalists Experience Aspirational, Safety, and Knowledge Deficits That Prevent Them From Practicing POCUS

Simulator-Based Training in FoCUS with Skill-Based Metrics for Feedback: An Efficacy Study